A Good End of the Year

OK, I totally admit, I’m becoming soft. When it comes to snowy winter excursions, having a camper is extremely awesome. I’m still looking forward to spending plenty of nights backcountry, in our tent, but with several truck camper trips under our belts, I have renewed affection for roadside dispersed camping. Excluding our extended canyon country trips, we’ve never done a whole lot of dispersed car/tent camping, or even campground camping. Tent camping, roadside, is awkward enough during the nice weather, but when there’s 3 or 4 feet of snow on the ground . . .  good luck finding a spot to set up. However, with the camper, any nice wide navigable shoulder along a Forest Service road is fair game (so long as camping isn’t specifically disallowed).

For our final excursion of 2015, we drove up to the southwest corner of Colorado for more skiing. Due to the unstable snow pack (we always gather data before heading out), we decided to stick to the lower elevations, and explore the La Plata Mountains west of Durango.  We were hoping we’d be able to locate some suitable areas for dispersed camping, although we did have a backup plan: the Mancos State Park Campground remains open all winter. Fortunately, the snowmobile and skiing groups in the area are very active, and they ensure that many of the roads that access public land are plowed regularly, at least far enough to get you just over the line into the National Forest. The folks who plow clear nice wide shoulders and large parking areas to accommodate all the trucks and trailers that pull in on the weekends, so midweek, there’s plenty of room to tuck a truck camper out of the way. 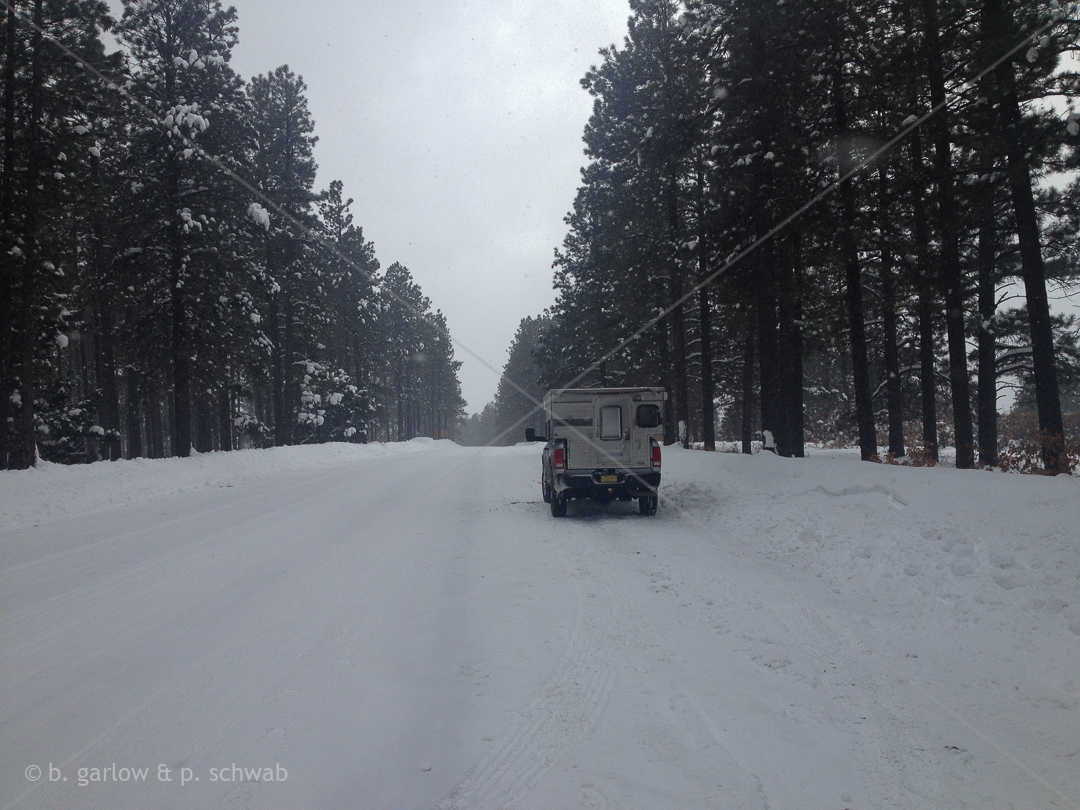 Our first stop was FR 561, just north of the State Park. We spent an afternoon exploring the snowy road, as well as some of the trails in the area, 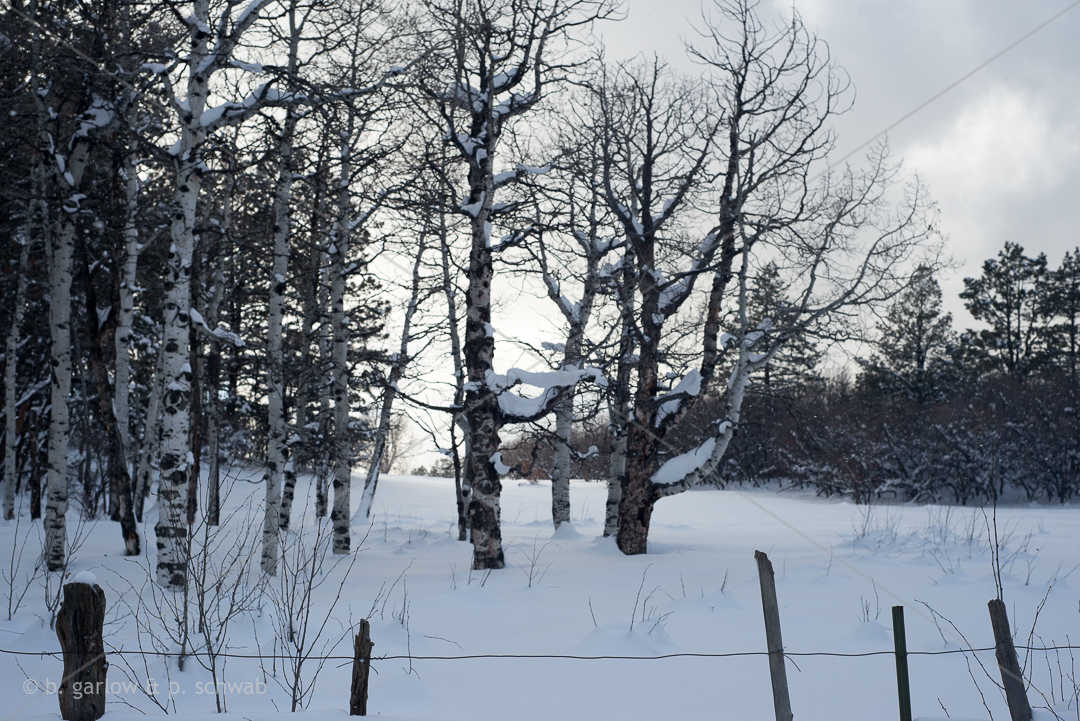 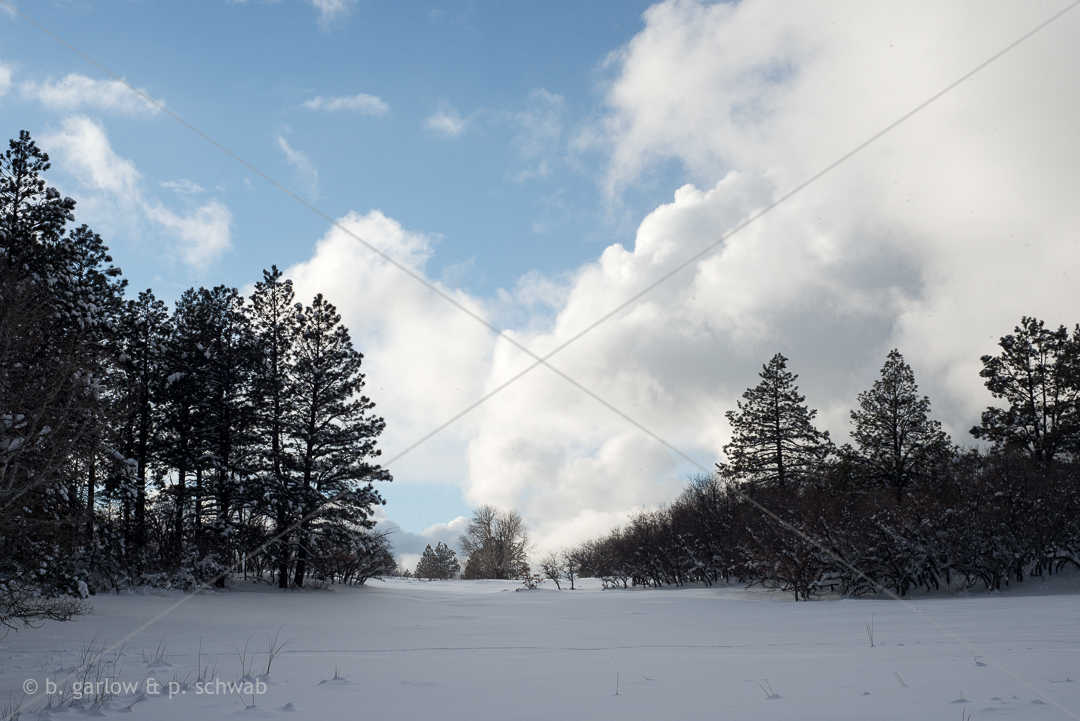 before popping up and spending the night. There were other vehicles parked there overnight, although we were the only folks camping roadside.

The next day we relocated to the Madden Peak Road. We spent several hours skiing the road, 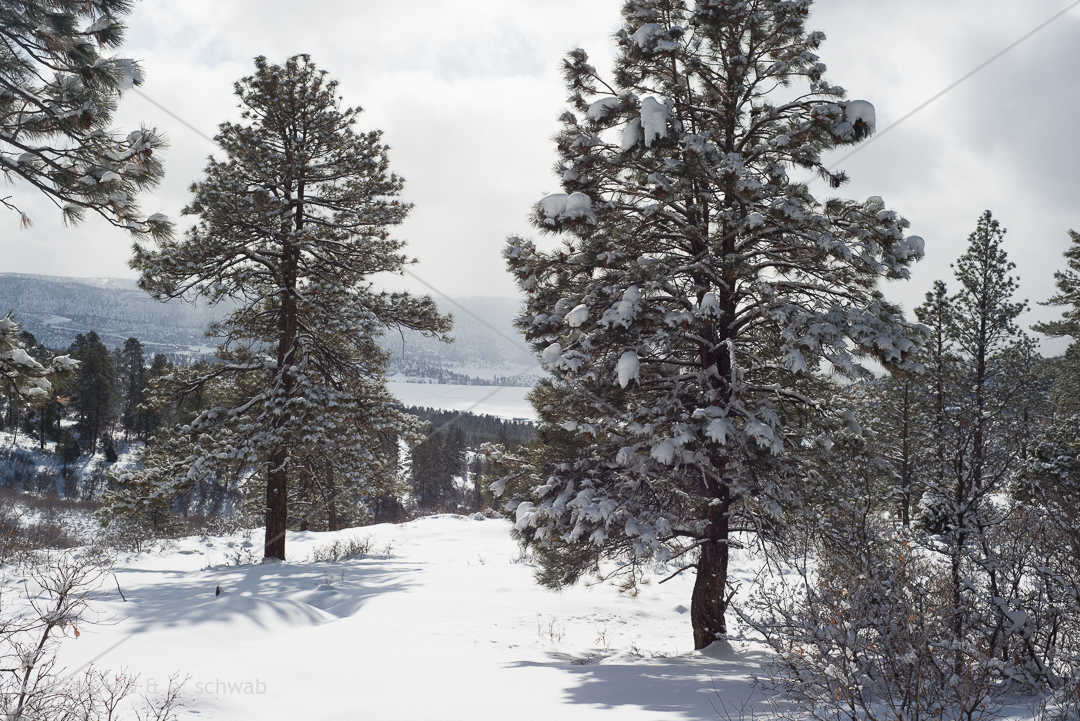 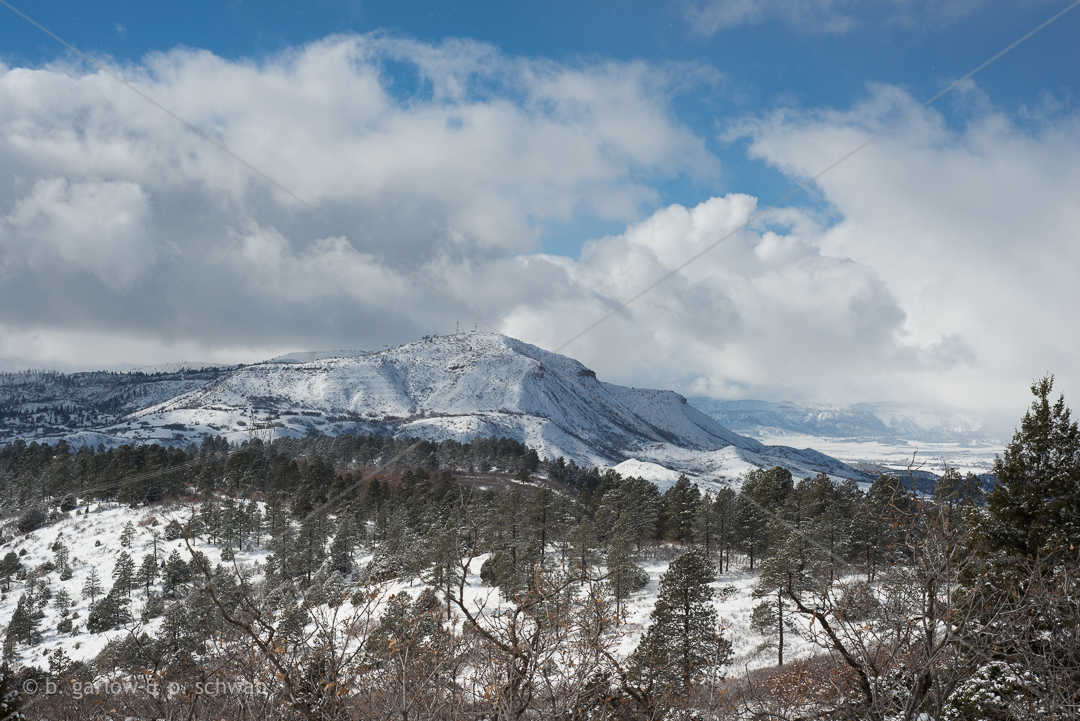 then returned to our mobile ski chalet 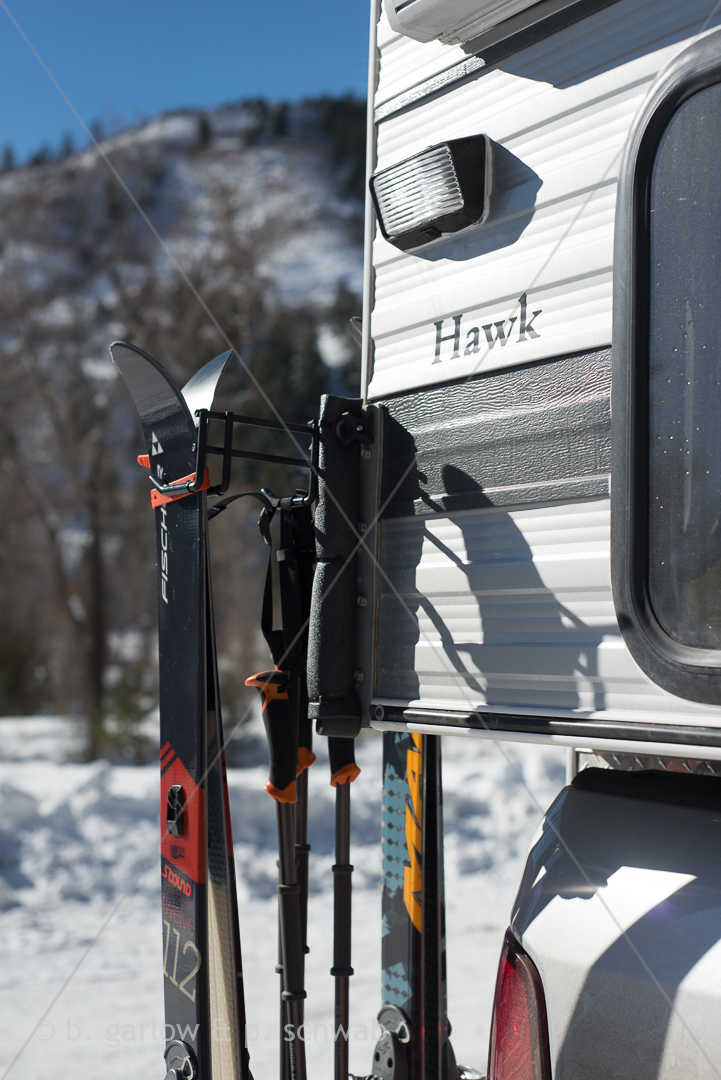 for hot beverages (!) and lunch, before setting off to explore the old narrow gauge railroad bed. Between the crew that works the pipeline pumping station and the popularity of the ski trails, there’s a lot of activity in the plowed parking area during the day, but we were the only vehicle there overnight.

For our final ski day, we drove back into Durango. We were hoping to get in a bit of a climb and some nice long easy downhill slides, so we opted for CR 204, Junction Creek Road. This entire area is day use only (the campground is closed for winter), and the road was not passable beyond the lower parking area for the Colorado Trail, as evidenced by the jeep resting on it’s roof a bit further up the road. Since the previous day’s exertions had taken a toll, we bailed about halfway up the long climb, took a couple of photos, 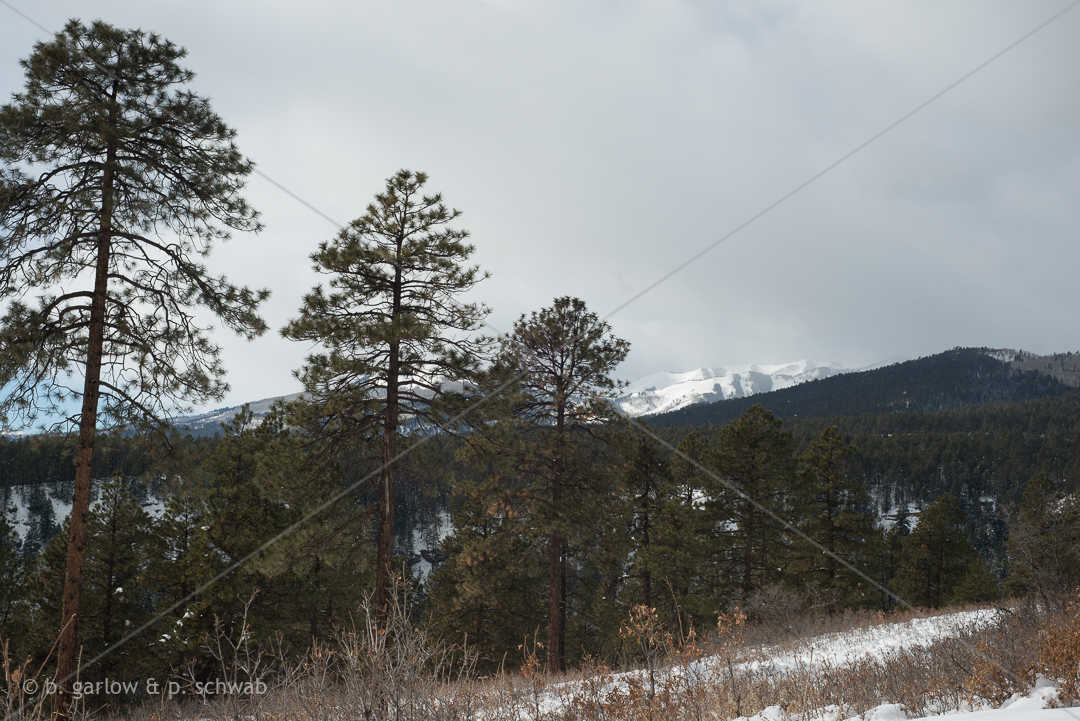 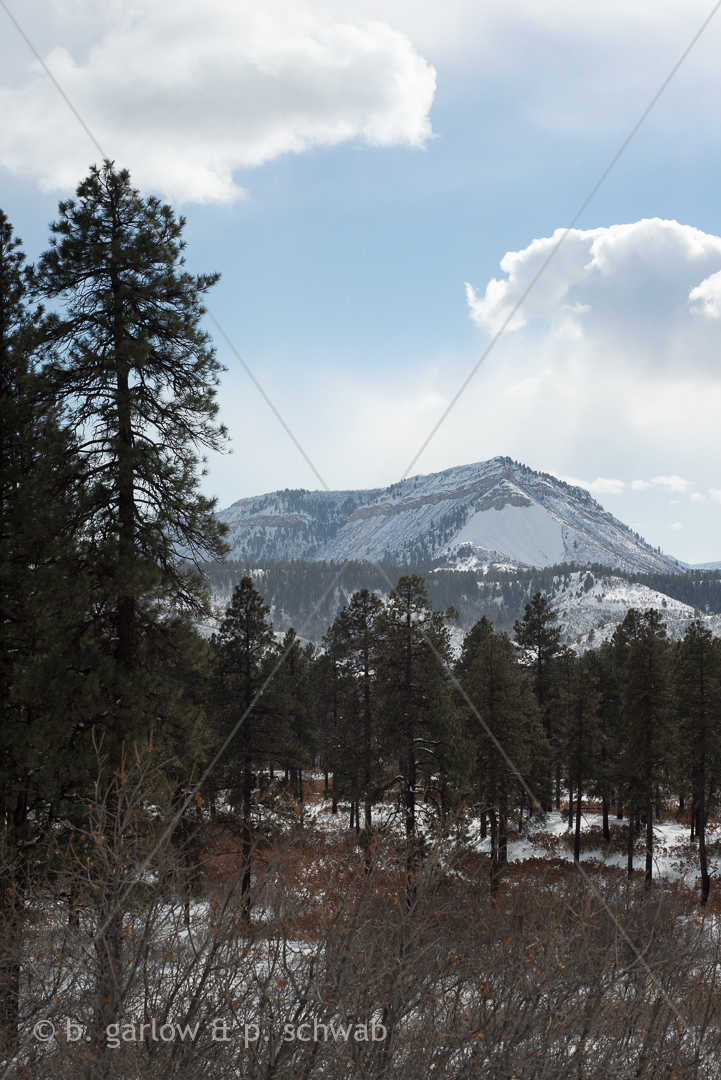 then started the trek home – which meant we were able to get half the drive under our belts, and still pull into the BLM Angel Peak campground in time to catch the glorious New Year’s Eve sunset: 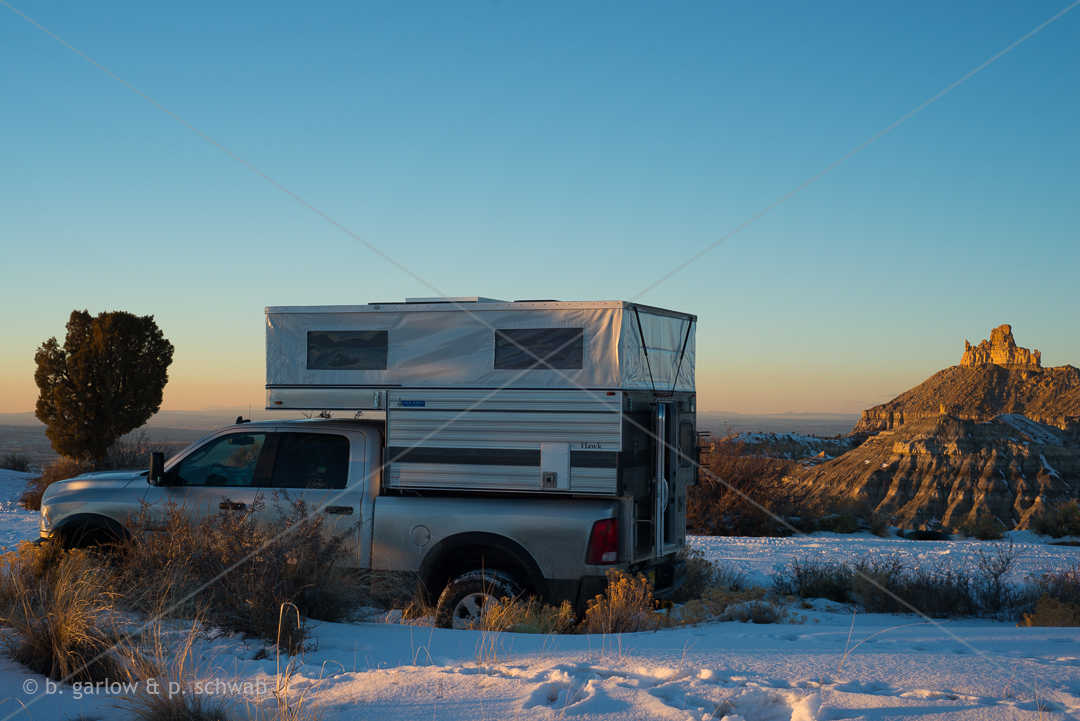 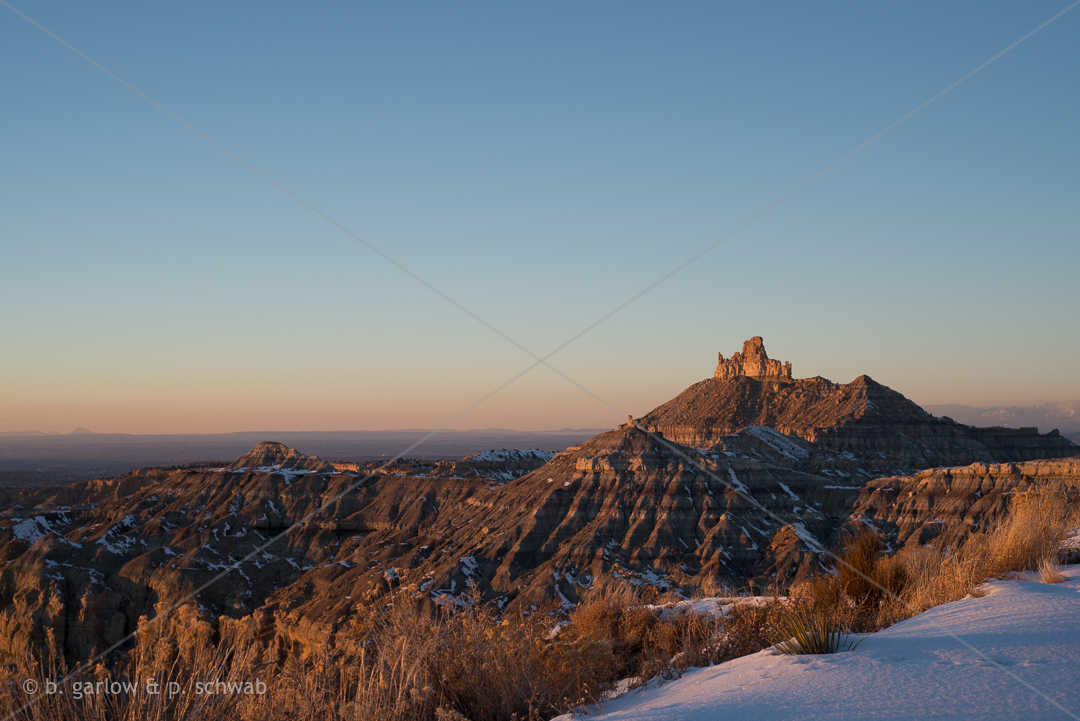